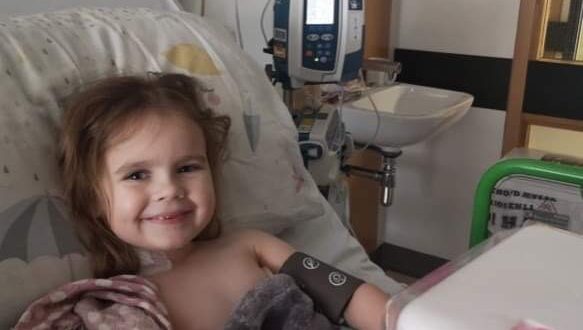 Sadie made a dramatic entrance into the world on the 10th October 2015 and has pretty much turned our world upside down ever since. We knew pretty early on that Sadie had trouble feeding, it was always a really stressful experience, she would scream in pain and go floppy and a horrible shade of grey pretty soon after it. My son had reflux and a milk allergy and so the medical professionals put a lot of her symptoms down to that.

When Sadie was 8 weeks old she went into shock and appeared to be in what we were told was ‘obstruction’ . We were in our local hospital and were told that she would need to go to a bigger hospital to have life-saving surgery.

When we got to the ‘bigger’ hospital we were told that they were not sure if this actually was obstruction, after a lot of discussions and no one being really sure what was going on, Sadie was eventually taken for surgery, we were then told that they could not find an obstruction and that she probably just had colic and that ‘some babies do just cry’.

This was only the start of Sadie’s problems. The feeding issues and difficulties continued, and got progressively worse, Sadie started to look more and more unwell and we were eventually admitted back into our local hospital. The doctors there could not work out what was happening with her, and were also unable to feed her. After a week stay we were then transferred to a children’s hospital in London where we were told we would be for some time.

During this 3 month admission in London, Sadie received TPN as they were also unable to feed her in any other way. Still no one could understand why Sadie was the way she was. We eventually came home on jejunal feeds.

Sadly the admissions to hospital did not reduce and Sadie has spent the majority of her life in and out of hospital, we lost count at just over 70 admissions to our local hospital that was without being in London.

In February 2019 Sadie became very unwell and appeared to be in obstruction again, she was taken from the local hospital to high dependency care in London. At this point she was vomiting blood, and was very poorly. This was the first time Pseudo Obstruction was mentioned to us. We were also told it was extremely rare, and so may not be the case but would need investigating.

May 25th 2020 we were admitted to the specialist unit for pseudo obstruction under a very well-known children’s hospital in London. This is when everything changed for us. Sadie began the intense testing and investigations that this pathway entails. This was tough!!!

In the middle of the pandemic our family was completely split into two, with myself caring for Sadie in London and my husband caring for our 8 year old son at home.

The testing was worth the heartache as Sadie was diagnosed with Paediatric Intestinal Pseudo Obstruction in July 2020. Following this we were told that they would continue to trial different feeds at lower rates, whilst also trialing a new drug that could help with the condition. It was at this point that we were also told that Sadie would need a decompression ileostomy as well as deep muscle biopsies. Sadly the medication did not work (in fact it had the opposite effect) and we were told that Sadie was in intestinal failure due to her condition.

Total Parenteral Nutrition (TPN) via a central line was now the way forward for Sadie in the first instance. Two days after stopping feeds and starting the TPN Sadie woke up and said to me, “I feel better now mummy.” For the first time in nearly 5 years she was not in pain.

Sadie did then undergo surgery for ileostomy formation and deep muscle biopsies. This was a long hard recovery but as usual she was amazing, and she no longer has a huge bloated belly.

We were finally discharged from hospital at the beginning of September.

Since being home Sadie is going from strength to strength, we still have a busy life with lots of medical interventions for us to do at home, but we are home and all together and Sadie is no longer in pain.

Now I am under no disillusion that the road ahead of us will not be an easy one, there will always be unexpected bumps and hospital admissions but for the time being I am just enjoying seeing my little girl actually live a little more than she was ever able to before.

We were introduced to P.O.R.T by another parent on the ward a little while after diagnosis and have been supported by them ever since, it is so comforting to know that people are fighting for more research into this debilitating condition.

The journey to Sadie’s diagnosis has been extremely tough. It has tested me more than I ever thought was possible, and made me doubt myself as well as many health care professionals on numerous occasions. The constant not knowing and being pushed from hospital to hospital, asked the same questions over and over again, the not being listened to and the constant questions from other people asking “what do you mean she doesn’t have a diagnosis??”

This is a very difficult condition to diagnose, and one that definitely needs more publicity and understanding from medical professionals that have never even heard about it. My biggest advice as a parent is to never give up, and to always trust your gut instincts, you know best!