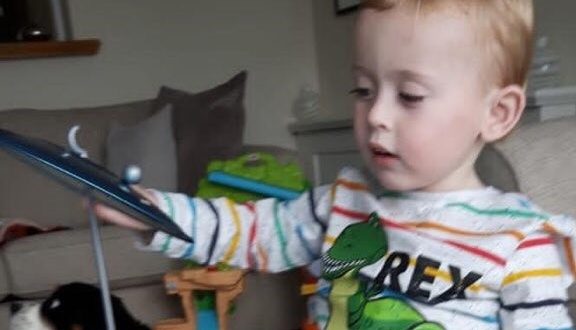 Ollie (the happiest lad alive) was born on 28th August, after a 30 something hour labour, via vacuum due to low heart rate, and other labour complications. During prenatal scans we were made aware that he had a condition known as hydronephrosis and would be required to stay in hospital for a few days for monitoring, however it should be of minimal concern. Little did we or the prenatal doctors know, he had another on-going issue……

Immediately, from birth, Ollie was unable to tolerate any form of feeding, began vomiting green bile & had significant distension. He was transferred to Newcastle RVI hospital, placed on a drip to keep his hydration levels up and tested for several conditions inclusive of meningitis & Crohn’s. After 7 days of blood tests, spinal taps, x-rays and various other procedures a decision was made to conduct a small bowel follow through test.  Some dye was passed into his stomach, and radiographers watched it move through his system. Much to our delight, it appeared there was light at the end of the tunnel, a blockage had been found in his small bowel, and he was scheduled for emergency surgery to rectify the issue. A number of hours later, Ollie was brought back from theatre and several surgeons came to speak to us about their findings. When Ollie had been opened at the site of the blockage, there was nothing present, no mechanical obstruction, no webbing or folding, simply dilated bowel. We were informed that in 25 years of surgery, none of them had ever came across this previously. Understandably, this felt like a massive kick in the stomach and we were left with many more questions than answers. All throughout this process Ollie hardly ever cried, he smiled and babbled away like the true chatter box he has turned into.

A further week of tests ensued, ruling out other disorders such as Hirschsprung’s, various types of infection and diseases then on day 14, Ollie was given a PICC line to administer TPN (which he still receives to this day) to ensure he would grow. After a few more months we were advised Ollie would be in hospital for the first year of his life, and would need a trip to Great Ormond Street for a series of tests to try and get him a diagnosis. True to everything he had done so far in his life, he continued to surprise doctors and get stronger much quicker than anticipated and left hospital 1 day short of a 6 month stay.

Going home with TPN and a raft of medicines initially seemed daunting, with a new child, however it quickly fitted into our daily routine and Ollie began to thrive when out of hospital. Day trips out, socialising with other babies and discovering a whole raft of sights, sounds and smells. Each day passed and each day he seemed to grow bigger and stronger. By age 1 we had our first of 3 trips (so far) to Great Ormond Street for an initial assessment. Based upon his hospital records they believed he had a disorder called Paediatric Intestinal Pseudo Obstruction, but we would need to wait until he hit 10kg in weight, before they could do the relevant tests, which would take a fortnight to give him his diagnosis.

Months passed and eventually Ollie hit his goal weight. By this time Ollie was walking, and up to all the usual levels of mischief an 18-month-old can get up to! The fortnight of tests was tough, for us as a family, however we made the most of “off days” and took Ollie all around London to see the sights. From Camden to Borough Market, Sea life centre and the London Zoo (which he absolutely loved), this really made a difference to the trip and I would urge any parent who needs to take their child for these tests to try and make the most of the time when tests are not taking place. After the culmination of the tests we returned home to await the results.

Results day came and unsurprisingly, Ollie was diagnosed with neuropathic paediatric pseudo-obstruction (nerve related) and would need to have a gastrostomy and ileostomy fitted to assist with his symptoms and maximise feeding potential as he got older. Due to the length of time it took to get to a diagnosis, we had already prepared ourselves as a family that this operation would be needed so we were prepared for what would come next.

A few more months passed and another trip to Great Ormond Street, this time for surgery. Ollie true to form was unphased by the whole process and took it all in his stride. The surgery took around 6 hours however there was delay due to an additional mechanical obstruction being found at the end of his ileum which needed to be “unblocked”. Less than 24 hours post-surgery we were shown stoma & gastrostomy care and all I can say is “in at the deep end” is the best way & within a few days we were proficient in changing and caring for his stoma. Ollie took roughly 2-3 weeks to recover from surgery and we were back off home.

The difference the surgery made to Ollie’s quality of life was incredible. Gone were the 5 or 6 bed changes per night from vomiting, distension reduced to almost non existent levels & Ollie was able to walk and move around in a completely different manner to before. Within weeks he was running, diving off the sofa and trying to climb everything in the house much to our dismay.

Weeks and months passed (in lockdown) and Ollie kept going from strength to strength to now where he has just been enrolled in nursery to start in Sept 2021. If we could give advice to any parent is that light is at the end of the tunnel, you will have very bad days however make the most of every moment, treat them like any normal kid and most importantly, have fun!