Our Trustee Kilian Fitzsimmons-Wilson has organised a Charity Golf Day on Friday 26th May at Accrington and District Golf Club. All proceeds go to P.O.R.T. Charity. Please contact Kilian on kilianwilson@hotmail.com.

Ian Frost and his team of 12 cyclist are cycling from London to Amsterdam, starting May 24th , aiming to cover 100 miles a day (400 miles in total) All proceeds to P.O.R.T.

P.O.R.T Trustee Ian Frost and friends and colleagues cycled from London to Amsterdam, covering 100 miles a day over 4 days. The weather was hot, the last day being 36 degrees, and they succeeded, getting to Amsterdam safely and raising a fantastic £2,475 for P.O.R.T.

The London to Amsterdam team members were:

Here is a selection of photos from the ride. 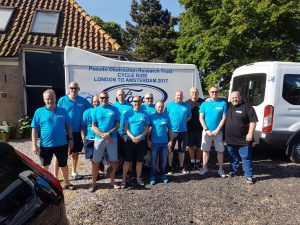 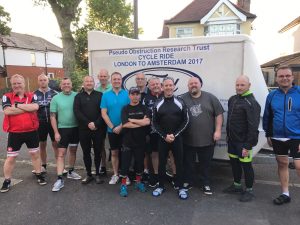 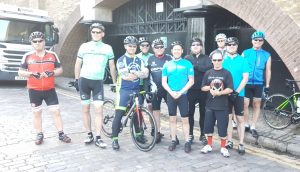 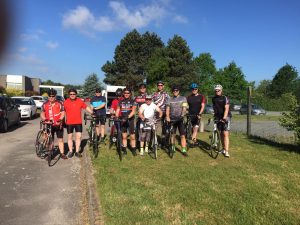 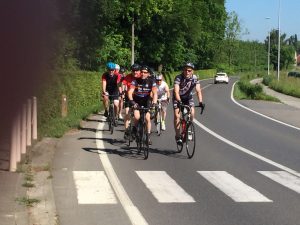 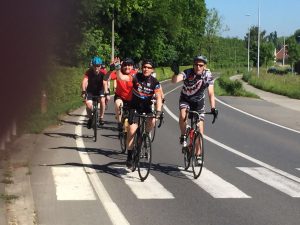 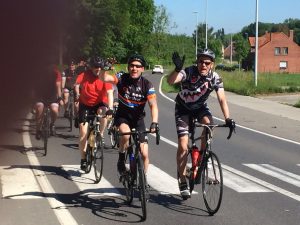 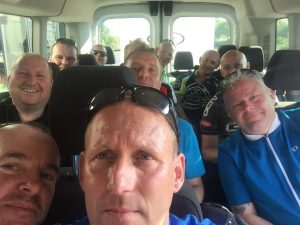 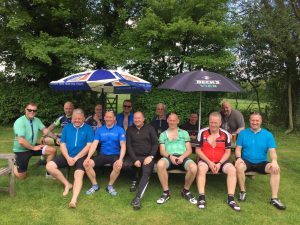 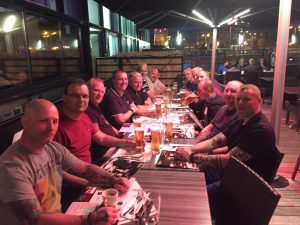 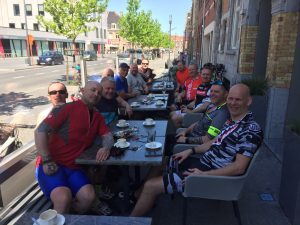 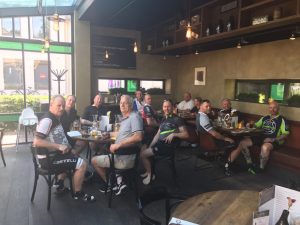 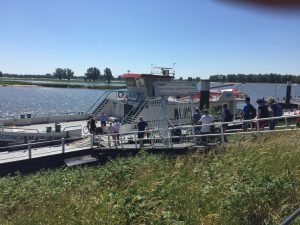 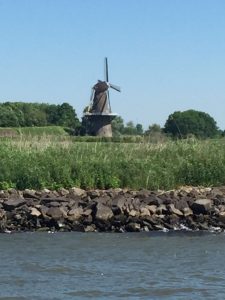 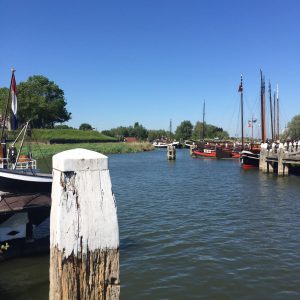 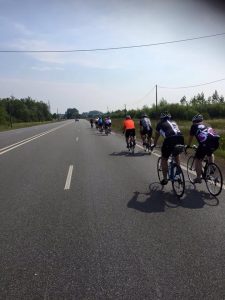 We are extremely excited to announce that we will again be holding one of our infamous events, the P.O.R.T. Charity Ball.

Tickets for the event will go on sale soon at £75 per person. This price includes a four course meal, all inclusive drinks package, together with a raffle, auction and full evening of entertainment, dancing and fun for all.

The P.O.R.T. Charity Ball is one of our biggest events and helps us not only to raise funds, but to raise the profile of the charity. It is a very enjoyable night for all, and helps us to continue making a difference to the lives of those affected by Chronic Intestinal Pseudo Obstruction (CIPO) and other forms of dysmotility.

If you’re interested in attending this exciting event please do not hesitate to contact our Chairperson, Sue Stewart (Sue_Stewart_pseudo@hotmail.co.uk) or Trustee Rebecca Stanier (Rebeccamstanier@outlook.com). 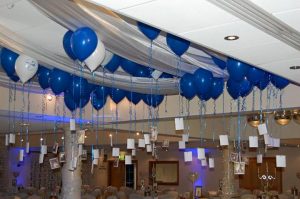 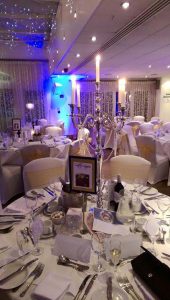 Could you walk the Colourthon in aid of P.O.R.T on Saturday 1st July 2017?

You have the choice of two events, the main event, the Moonlight Colourthon, or the shorter Twilight Colourthon, which both start at Chalkwell Park at 6pm.  It’s for those aged 13 or older.

You are sponsored to walk, with prizes for the highest amount raised, as our Chairperson Sue Stewart won in 2016, and best dressed, which we also won in 2016 – so dress up if you would be prepared to, as well could win a bonus. P.O.R.T will provide embroidered sashes and tutu skirts.

The “main event”, a half marathon (13+ miles) around Southend, Westcliff and Chalkwell.

To find out more, go to www.colourthon.org/faqs

To register, go to www.colourthon.org/registration 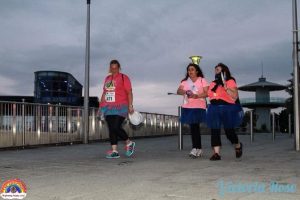 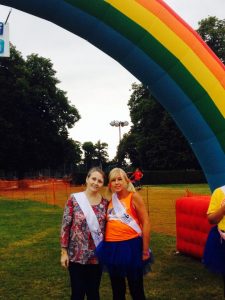 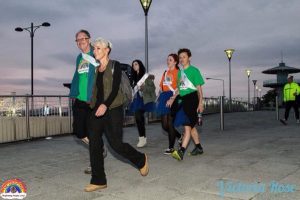 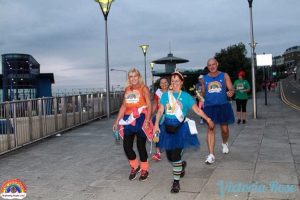 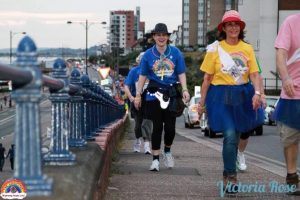 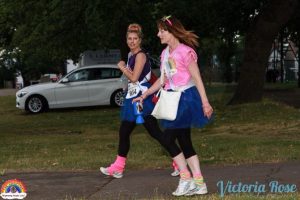 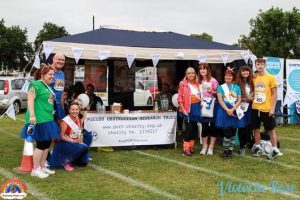 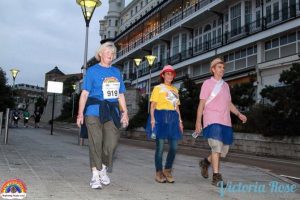 Rakesh Patel is taking part in this year’s Virgin London Marathon on behalf of P.O.R.T.

Could you sponsor Rakesh? Please click here to do so.

If spectating at the Marathon, could you cheer Rakesh on at the sidelines of the London Marathon along with a P.O.R.T. charity collection pot?

We also have Paul Waldock running the London Marathon for P.O.R.T. as part of #TeamBob, the fundraising initiative run by Lesley Beer in honour of Robbie (Bob) who suffers from CIPO.

You can donate to the #TeamBob fundraising page – click here. 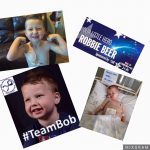 Mark Holman ran the London Marathon for P.O.R.T. He is raising money on behalf of a beautiful little girl called Ruby Skye who suffers from Chronic Intestinal Pseudo Obstruction. Mark feels Ruby is an inspiration because despite suffering with this terrible illness she remains a happy child who always has a smile on her face.

Paul Hutchins took part in the Paris Marathon on 15th April 2012, Paul ran 26 miles and raised over £2000 for P.O.R.T. Paul has witnessed first hand how chronic intestinal pseudo obstruction can affect people and the impact it has on their lives. Paul raised the money in memory of Emily Jasmine Frost.

Helen Brooks did a skydive for P.O.R.T.

Our 5th annual charity ball took place at Stockbrook Manor on the 13th October. Over £10,000 was raised. Thanks to everyone who supported us.

The reason I took the challenge was as a personal challenge for me and to get my adrenaline junkie fix!! Mainly though it was to help raise awareness for a wonderful cause that deserves more recognition and support. Although PORT sufferers may be few and far between, there are people out there like Ruby (my inspiration) who need that extra help and support to overcome the challenges they face each and every day of their lives. My aim was to raise as much as I could to go toward researching options and assisting these sufferers.

I thoroughly enjoyed the challenge, although a 280ft spiral staircase isn’t the best flight of stairs I’ve climbed, I made it to the top and despite the weather conditions being typically British I got a real buzz and sense of enjoyment from the abseil itself.

The Valentines Ball was a huge success. We managed to raise over £4000 with the raffle and auction, congratulations to all those successful bidders. Special thanks to Dr Nigel Meadows for a great speech. Port were lucky to have a special guest, comedian Sean Lock.
Friern Manor provided us with a fantastic venue and food,thank you.

The evening would not have been a success without the continued support of our friends and family.

On 28th February 2010 Steve Carter ran the Roding Valley half marathon for P.O.R.T. Charity. Steve raised over £450 for the charity.

Above Is a picture of our God Daughter Daisy, from the day she was born, she has had a place in our hearts, such a fun loving little girl, most of you know Daisy’s story and about her condition and that the N.H.S. won’t fund any research into P.O.R.T.

Daisy has been so brave by undergoing so many tests and operations, we felt that we needed to give support, so we put a date in the diary .

We decided as a family to try and raise awarness and funds, so on the 20th March 2010 we are doing a sponsored walk at Creswell Craggs, We have many family and friends involved in this walk, so I know we are going to have a great day for Daisy. The walk raised £381 congratulations and many thanks from P.O.R.T.

Rudridge are very proud to have recently celebrated the 10 year anniversary of their company.
To help mark the occasion, a party was held in a Marquee on the football pitch at Selhurst Park, the home of Crystal Palace Football Club. Hosted by David ‘Kid’ Jenson, approximately 350 people attended and were entertained by hilarious comedian Ian Irving, and amazing Brit School Pupil…. singer Shanice Smith.
After the entertainment, the serious business of raising money for our nominated Charity ‘P.O.R.T.’ (see below) begun. Ian Irving was an incredible auctioneer and managed to raise an impressive £3.5k from the auction. Assisted by the raffle and a donation from Rudridge, we were able to raise a grand total of £8,500 for the Charity. A huge thank you to everyone for being so generous, especially the companies who donated prizes for the auction/raffle, and the successful bidders on the auction.
The evening ended with music from Live Band ‘Payback’, with some classic ‘Dad Dancing’ moves on view from the men.
A memorable evening and one that we hope to repeat at our 20 year anniversary. 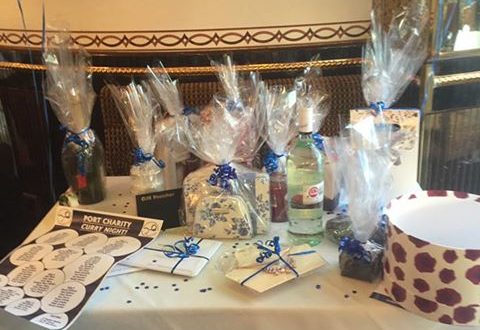