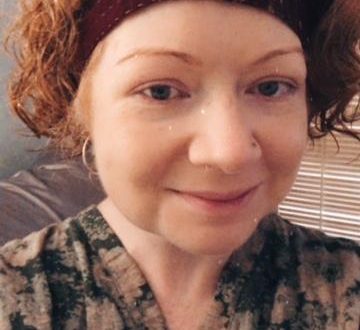 Hi my name is Alex, I’m 45 years old and I live in Australia. I suffer from CIPO and GASTROPARESIS, and a few other co morbidities attached to those conditions. I first became ill when I was 11, and it all started with a swelling in my groin, a low-grade temperature and fatigue. I generally just felt unwell and my GP organised for me to see a gastroenterologist, as he suspected I was suffering from something more than just a bug.

After my first surgery to remove my appendix (which was fine) and a laparotomy, I was sent home, but never really recovered. I started suffering from episodes of excruciating pain, vomiting and distension, which we now know were pseudo-obstructions. It usually meant a week or so on a drip, with a naso-gastric tube and a surgeon standing by in case things escalated.

After these episodes happening at least once a month, and looking about 9 months pregnant continuously, I had a loop ileostomy performed, to try and rest my large bowel and see if it helped with the obstructions. It did help with distension and digestion but didn’t help the underlying condition or the constant pain. After 4 years, at the age of 17, they reversed my ileostomy and performed a sub total colectomy and ileo-rectal anastomosis. Basically, I’d developed diversion colitis in my colon and it couldn’t be saved despite treatment.

I continued to have obstructions over the coming years and struggled with constant pain and other worsening symptoms. It was a difficult time as I was a young adult who’d missed a lot of school and was now socially isolated from losing friendships due to my ill health. Unfortunately, you realise how fragile those relationships are.

After numerous attempts at different treatments for my severe abdominal pain I finally was put on an IV morphine pump which gave me some semblance of a normal quality of life for a period of a few years.

Things however worsened in my late 30’s and the last two years I’ve been in intestinal failure. It became more and more difficult for me to eat and finally after losing nearly 20 kilos and suffering from malnutrition, I was put on TPN. Unfortunately, we tried feeds into the stomach and bowel but I didn’t tolerate either and TPN became the only option. I’ve spent the last 22 months managing that at home and continuing to try and find some sort of alternative for my pain. It’s still a struggle everyday just to function and do the most basic of tasks, but I continue to put one foot in front of the other and move forward.

I was thrilled when I discovered PORT as I was unaware of anyone else suffering from CIPO and had felt extremely alone in my plight.  I spent the last 34 years feeling like I was the only person suffering from this condition, and it’s been a very long and lonely road for myself and my family.

I look forward to talking with many of you about your situation, and hopefully comparing war stories might bring a treatment for either of us that has helped or at least been mildly effective for us. Please feel free to reach out and message me, as I’d love to connect and get to know you all as we battle through this fight together.