I had been fit and healthy weighing about 12st through all my younger years and indeed for the first half of my working life. In my early forties I first suffered severe stomach pains on an occasional basis which gradually became more frequent. This was in the early 80’s 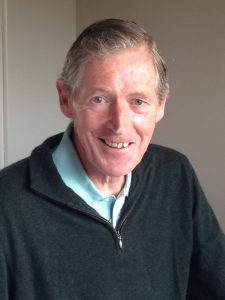 I eventually went to see a Surgeon who I knew and who had a very high reputation in bowel surgery – particularly for cancer sufferers. With the benefit of hindsight I should really have seen a Gastroenterologist in the first instance.

However following endless tests it was clear that cancer was not the issue but I did have an elongated colon which was prone to twisting and could therefore cause a blockage. He therefore suggested surgery and I had a “sub-total colectemy” which removed about half of my colon. This was in 1989.

This seemed to solve the problem for awhile but in 1993 the pains returned and having been diagnosed with adhesions I had another operation to divide them.

This also seemed to solve the problem for awhile and for about five years I was fairly healthy with only occasional bouts of pain. These usually required a Doctor to visit me at home and give me a Pethadine injection. If I was still in pain the following day I was admitted to hospital and put on a drip with a nasal gastric tube. The stomach was always very distended on these occasions and the pain intense. I had several visits to London hospitals and also when traveling once in Johannesburg once in Nairobi, and once in Athens.

In 1998 these bouts became much more frequent and at this stage I was referred to a Gastroenterologist.

After endless tests and trying various different drugs – none of which seemed to help very much – he recommended that I had another operation to remove most of the rest of my colon. This was duly done in 1999 . However within two days of coming home I had to be readmitted and x rays showed that my small intestine was now twisted and distended. This seemed to be caused by too rich a diet so soon after a major operation. I had had no real advice on what to eat after leaving hospital.

Having recovered from this it soon became apparent that the pains were still there. At this stage there was still no definite decision on exactly what the problem was although ” pseudo-obstruction ” was certainly mentioned as a possibility.

In one of the tests in early 2000 it was shown that my stomach was twisting and there was a danger that the blood supply could be cut off. In order to correct this it was eventually decided to put a gastro-peg in which would both anchor the stomach and allow me to vent it when it became distended. Unfortunately when this was done the peg pierced my bowel and I had to have an emergency operation to repair it. The peg was reinserted at this stage but never really helped.

I soon started to suffer pain again after the operation and although the peg helped a bit it did not resolve the problem. I had yet more tests but with no real conclusion.

I steadily lost weight over the next 18 months with the pains continuing fairly regularly, and eventually in the summer of 2001, with my weight down to just under 10 st, I decided to get another opinion from a clinic in America.

They did in depth testing over a ten day period and did diagnose that I had “pseudo-obstruction” and recommended that I went to see one of the specialist teams for my condition in either London or Manchester on my return.

As I was working in London I went to see the Royal London team who admitted me to hospital and put me on TPN (Intravenous feeding). I was there for three weeks and during that time learned to handle the TPN so that I could carry on with it at home.

Over the next few months my weight gradually returned and by September 2002 I was back to 12st. Soon afterwards my TPN line was taken out due to an infection and as I stopped losing weight it was not reinserted. For the next five years or so I was able to live a reasonably normal life. There were certainly bouts of severe pain but these tended to be only for 24 or 48 hours and I was usually able to handle them with Pethadine or Dia-morphine.

During this period I decided to take early retirement in order to try and take some of the stress out of my life.

However in 2007 the bouts of pain returned with a vengeance and my weight started to fall rapidly. After one brief stay in hospital at the end of March I was put back onto the TPN and although my weight returned reasonably quickly the bouts of pain continued all to frequently.

Since then I have had the odd good patch maybe lasting for a week or two but then something sets my tummy off again and the pains return. 2007 and the first half of 2008 have not been good.

I remain on the TPN which the Doctors have increased and am also eating considerably less than normal. At the moment this is working and I am currently enjoying a much better period.

This is an extremely difficult condition to diagnose and if there is one lesson to be learned from my experience it is that the removal of the colon – or most of it – is probably not a good idea as the twisting and blockages seem just to move up. In fact I believe that surgery should be resisted if at all possible unless it is a last resort.

I first met Richard Cazenove (Dick) at a meeting with Professor Jeremy Powell-Tuck at The Royal London Hospital when initially forming the Pseudo Obstruction Research Trust (PORT Charity) back in February 2006. I was extremely nervous and remember very clearly how kind  and supportive Dick was. He encouraged my ideas to form the charity for vital research and awareness into Chronic Intestinal Pseudo Obstruction (CIPO) and gave me both the will and determination to follow the idea through.

Dick was a huge part of PORT, but more than that he was a very good friend. Dick organised a massive fundraising event for PORT in October 2007, the Isandlwana Lecture held at The Merchants Taylor Hall. This event was tinged with sadness at the lecture should have been taken by Richards’ good friend David Rattray, sadly he was murdered on 26th January 2007 in a bungled burglary in South Africa. Many would have cancelled the event but not Dick, he organised for Rob Caskie to attend to lecture on behalf of David. The evening was an incredible success raising in excess of £85,000.

During the next ten years Dick has always been in the background, advising me when I needed help, sponsoring me on numerous occasions for my Half Marathon and other fundraising ventures. He has been a sounding board for ideas and has always been there to support the charity in any way he was able.

Richard attended our PORT Charity day on 9th October 2015 which was held at The Wingate Institute speaking about living his life with this illness CIPO. His speech was very well received.

He was such a wonderful man who I will miss dearly. His name will live on in PORT Charity, a charity he held in very high regard.